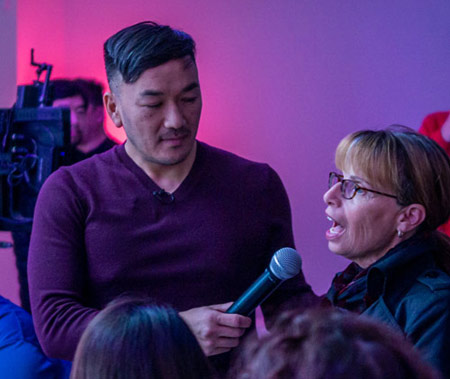 The Magic of Conversation

About “The Toan Lam Show”

Talk that Elevates and Radiates

–If you’re ready to go after that big dream and want some inspiration to stay the course...
–If you’re tired of looking for love/self-love in all the wrong places and yearning for your unfettered beauty to shine...
–If you’re longing to break free from the same ol’ rut so you can be better and do better in every area of life...

Let your spirits be lifted and shifted with “The Toan Lam Show” as Toan works his gift of gab with authentically extraordinary guests to connect you to a life aligned with your true self.

After a year filled with anxiety and zigs and zags that left many of us directionless, we all need a respite to feel lighter and hopeful. This show is the perfect place to re-emerge from the slowdown, be ignited and pursue that which truly lights your soul on fire.

Note from Toan:
I’ve been fortunate to achieve many of my dreams by my early 30s: TV reporter in San Francisco, co-host of the PBS show “California Heartland” and university instructor. It took a lot of hard work, determination and getting through some dark places to be able to share the light and life lessons with people on similar journeys. My wildest dream is to host my very OWN TALK SHOW and it’s happening! Join me for a whole lot of inspiration and fun.

Get to Know Toan Lam

As a child growing up in a trailer park in South Sacramento, Toan Lam didn't think his story mattered. "Who would care about a Chinese kid on welfare, dependent on food stamps and Section 8 housing to survive?" he thought.

His gift of connecting with people and a voracious appetite for reading was his ticket out of a seemingly hopeless situation. He discovered his power through many challenges: losing four family members in a year's time and getting laid off from his “dream job” as a TV reporter in San Francisco. Toan took these challenges on as a blessing. Instead of covering tragic news stories, he was driven to tell diverse stories about everyday heroes — which led to his next chapter as Chief Inspirator of Go Inspire Go. His work has been featured on Good Morning America, Disney and Hallmark Channels and Yahoo.

Toan is a sought-after speaker and producer of the documentary, “Caregiving: The Circle of Love,” which highlights three caregiving heores in the Asian American community.

“Toan is a force of light who effortlessly brings people together through his media platforms to generate thoughtful inspiration, joy and community. He is a natural connector and a skilled storyteller who can magically bring out others’ stories and show the ways we are all connected on this journey of life. ‘The Toan Lam Show’ is a gift to this world and I can’t wait to see it shown in every household!”
—Dr. Gladys Ato
“I am so happy I got a chance to be a part of the live studio audience of ‘The Toan Lam Show.’ The room was vibrating with love and LOLs. An exhilarating experience to hear the incredible stories of persistence and growth. Toan seamlessly engaged the guests and audience — informing and entertaining at the same time. Toan was in his element. I’m excited to see more!”
—Bahareh Sarhangi
“I LOVED and was thoroughly captivated by the pilot episodes of ‘The Toan Lam Show.’ Toan’s authentic way of disarming, connecting and squeezing the best out of his guests makes Toan credible, likable and relatable. You can feel that each guest opened their hearts to tell Toan about their journeys and the obstacles they faced.”
—Ankit Agarwal